Sunday morning was blessedly warmer than Saturday morning had been, and when we hauled ourselves out of our sleeping bags at 7:30 am there wasn’t any frost on the ground, in spite of the somewhat heavy rains that had gone on through the night.  We’d had the good sense to keep our boots inside the tent on a garbage bag overnight, and so they were dry and not frozen. 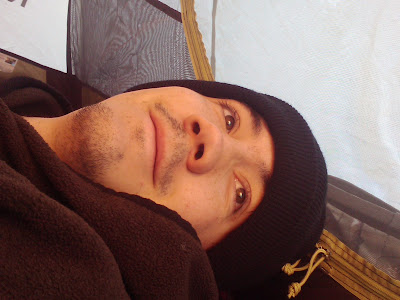 As quickly as we could, we packed up our bags, our mats, and eventually the tent.  Our new friends were already up for the day as well, and likewise had begun packing away their gear.

With our backpacks mostly loaded (aside from the food bags which were on the bear cables) we trudged over to the cooking area to make a coffee and eat some breakfast.  The clouds were quite low, and the mist on the lake looked spectacular. 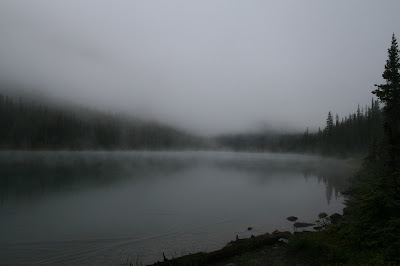 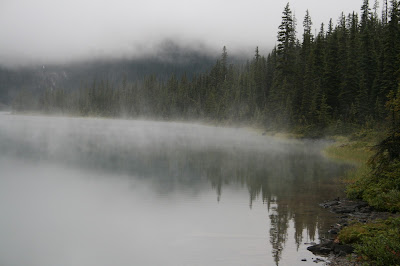 We boiled some water and drank our instant coffee (those little packets that Taster’s Choice makes are the cat’s ass in the woods) and ate logan bread with jam and peanut butter. Neither of us wanted to leave very badly, hence my sad little penguin: 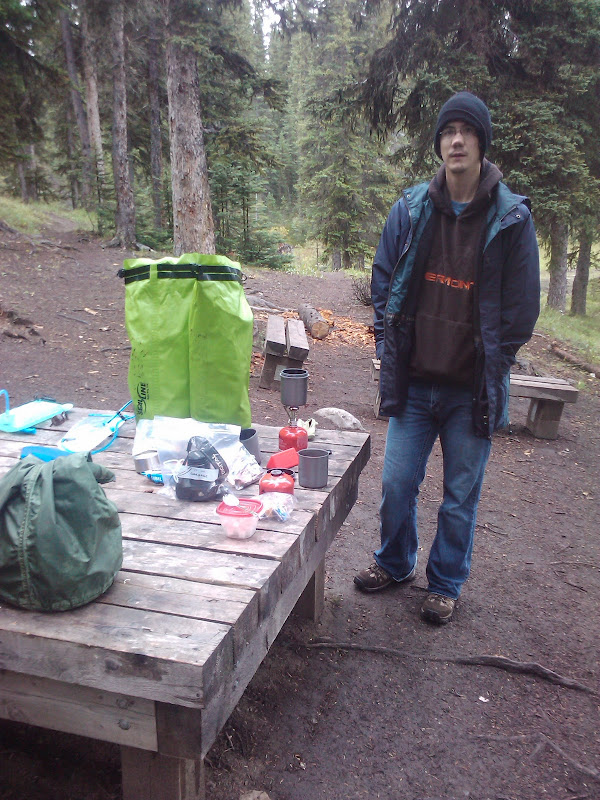 Once we had bid our new friends goodbye, we hiked off, hitting the trail at about 9:15 am.

Let me tell you, going down that wretched hill was absolutely aces. It took us no time at all to get back to the main trail and start our way down towards the warden’s cabin. 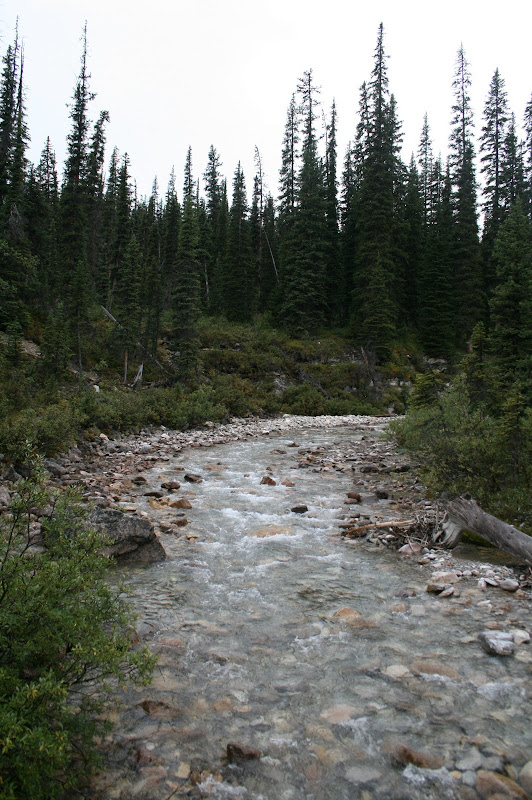 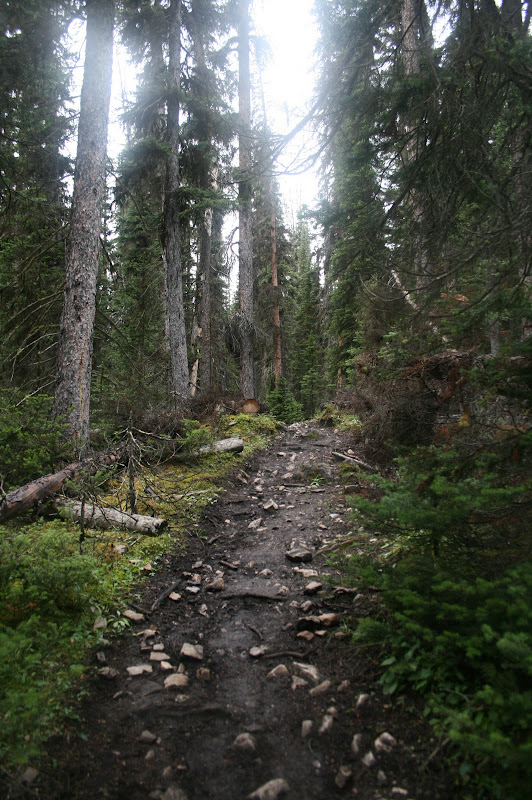 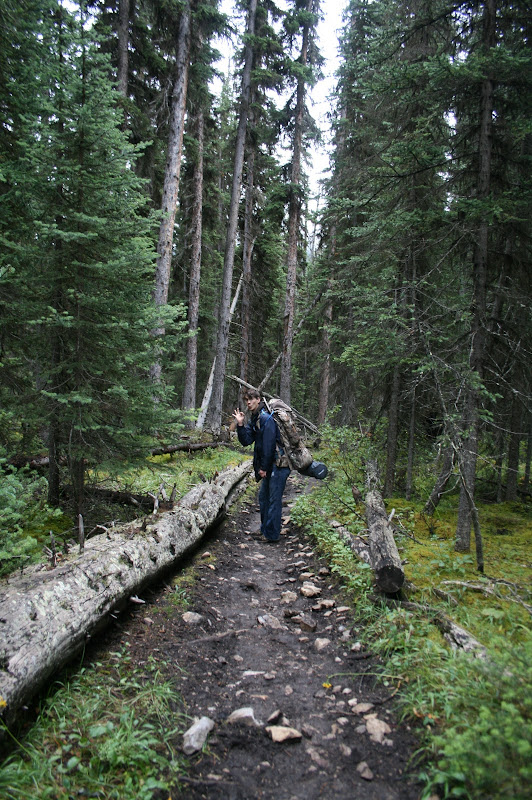 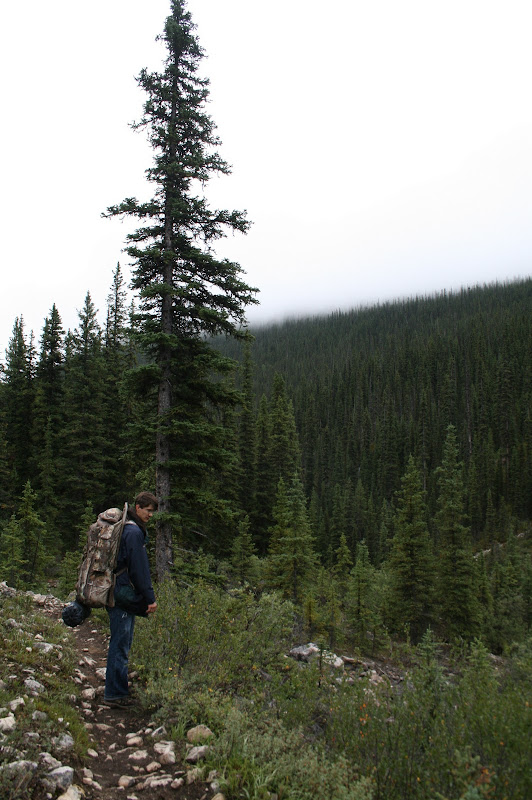 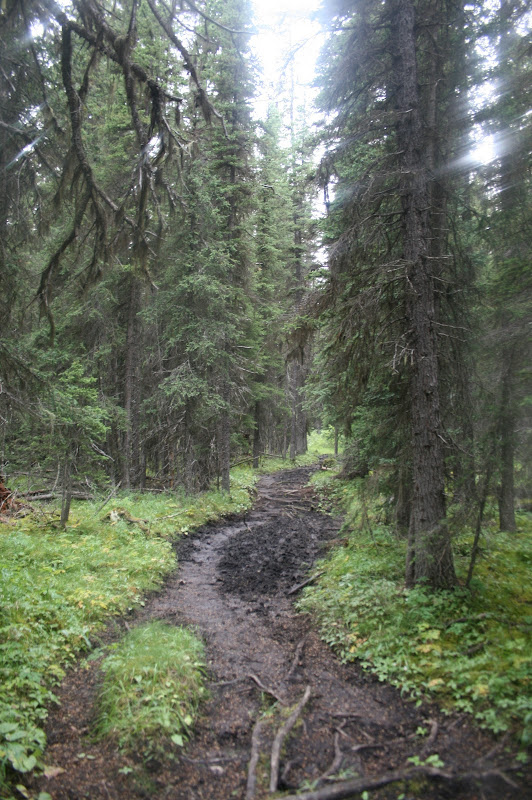 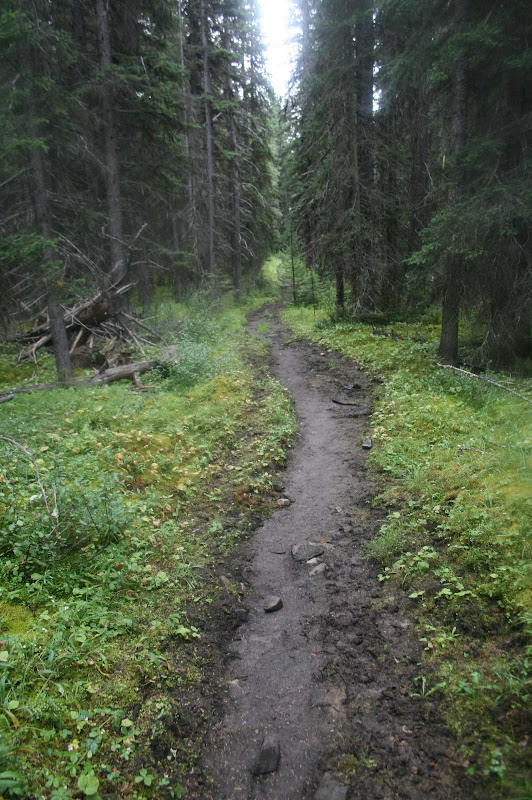 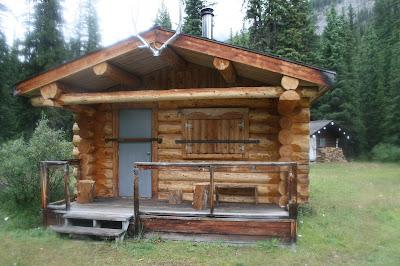 We made excellent time. When we reached the warden’s cabin we had already shaved an hour off of the time it took us to make the same distance on day one. No real surprise there of course.

After resting briefly we carried on, making it to Larry’s Camp around lunch time. We made it almost 10 km in a period of three hours. That same 10 km took us six hours when we were going the other direction.

We at couscous and beef jerky for lunch, changed our socks, and then struck out for the ink pots. Our friends from camp passed by us while we were stopped, but we caught up to them again when we stopped to take photos.

The ink pots, as it were, are a series of six small, clear pools. They remain a constant temperature of 4°C all year round (they don’t freeze in the winter, oddly enough) and the bottoms consist of quicksand. Although the source of the water that fills them is unknown, you can see it bubbling up through the sand in many places along the bottom (we tried to capture it in the second photo below, but you really need a video camera to get the full effect). 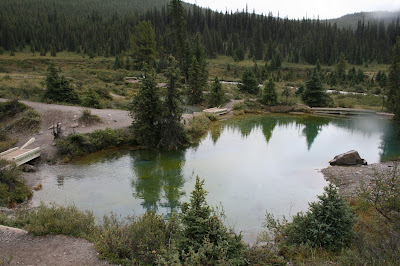 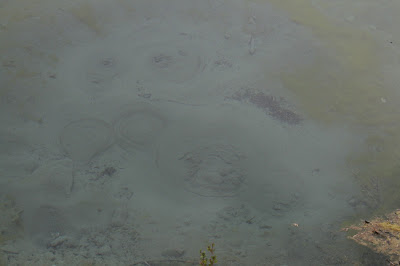 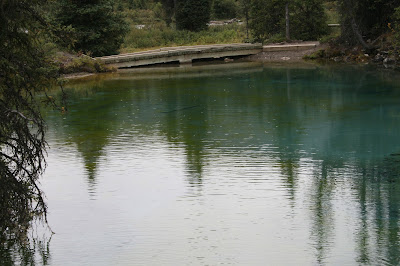 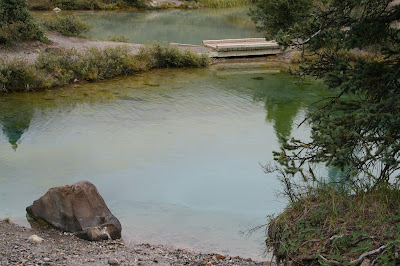 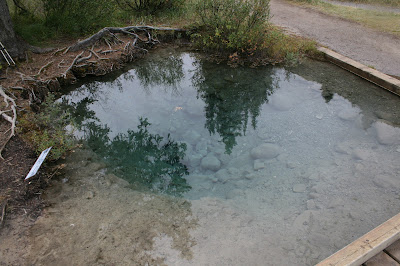 Mike and I don’t have many photos of the two of us together, so we asked one of the gentleman we camped with to snap this picture. 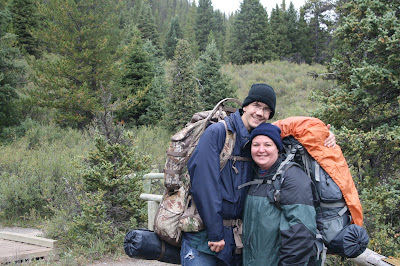 Then it was time for one last climb, to get out of the meadow, and we would be back on the paved trail and catwalks. Being a weekend there were tons of people wandering in both directions along the way. Several of them stopped to remark on our massive backpacks and ask us where we had come from.

My feet were rather badly blistered (seven in total, and at least two of them were larger around than a quarter) and the last couple of km were slow, but we made it to the parking lot around 4 pm. It took us 6.5 hours to hike out, with 1.5 hours worth of breaks, so five hours of actual hiking (as compared to the seven we did to get up there). Not bad if you ask me.

We were sore and tired, but it felt amazing to have accomplished it.  After throwing our packs in the back of the van, we headed for home, chatting all the way back about what an incredible experience we’d had and planning for next time (we hope to go back next summer for a couple of days and do some fishing).  We also discussed our favorite parts of the trip (we both agreed that sitting in the sunshine by the edge of the lake on Saturday afternoon, and being together was the main highlight) and how sad we were that hiking season is over for this year.

After we got home we headed directly to the shower, leaving everything in the van.  The hot water was lovely, and as much as I love being out in the woods, it was nice to be clean and warm.  After we got dressed, we went out for dinner and then went to bed as early as possible.

I’m so glad we managed to get in one really great trip before summer slipped away.  Now we have all winter to buy more equipment before next season starts!