So our long-awaited and much-anticipated first-ever overnight hiking trip went off wonderfully. It was just Mike and I, and 36 km of heavily wooded trail. Oh, and a grizzly bear.

We pulled into the trailhead parking lot after purchasing our wilderness passes in Banff, and having a delicious dinner at Earl’s. A wilderness pass is kind of like making a campsite reservation. You pay a very reasonable fee to use the backcountry camping sites (it’s about $10/night/person) so that the trails and sites can remain maintained. We decided to sleep in the back of the van on Thursday night, rather than unpacking all of our carefully organized gear at a campsite. It was cramped, and sort of chilly, and I am pretty sure I only slept in sporadic spurts, adding up to no more than four hours in total.

Friday morning came very early. We boiled some water for oatmeal in a bag (I’d packed instant oatmeal, pecan bits, and dried cranberries in heavy duty ziplock bags, which you then add boiling water to, stir, seal, and let sit for five minutes) and instant coffee. A local construction worker drove past us, poked his head out of his truck window, and with a chuckle shouted “I like your kitchen”. 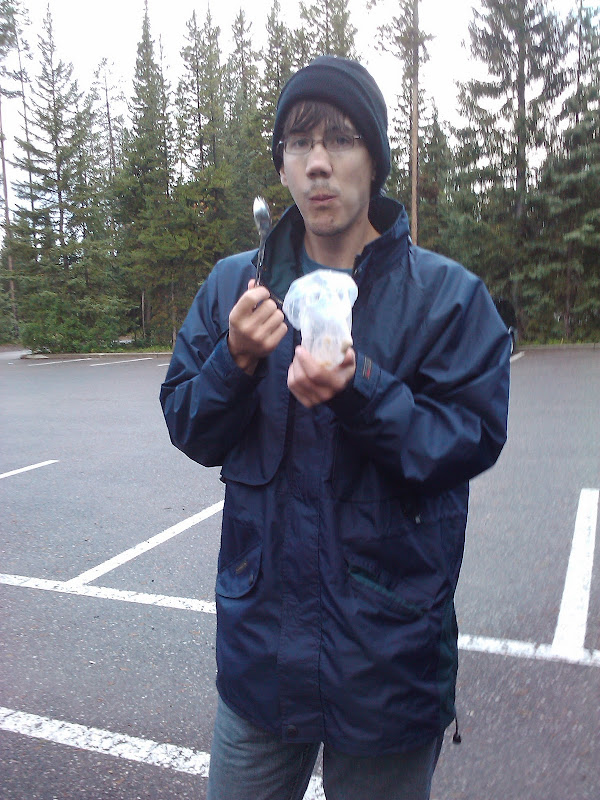 I’m sure we looked pretty funny with our tiny backpackers stove in the middle of the parking spot next to us, decked out in our rain gear and toques. It was already drizzling and the forecast was abysmal, so with somewhat reserved optimism, Mike and I set out on the first leg of the hike, which was a 2.7 km stretch of catwalks and paved trail that led past a series of waterfalls. We hit the trail at 8:30 am. 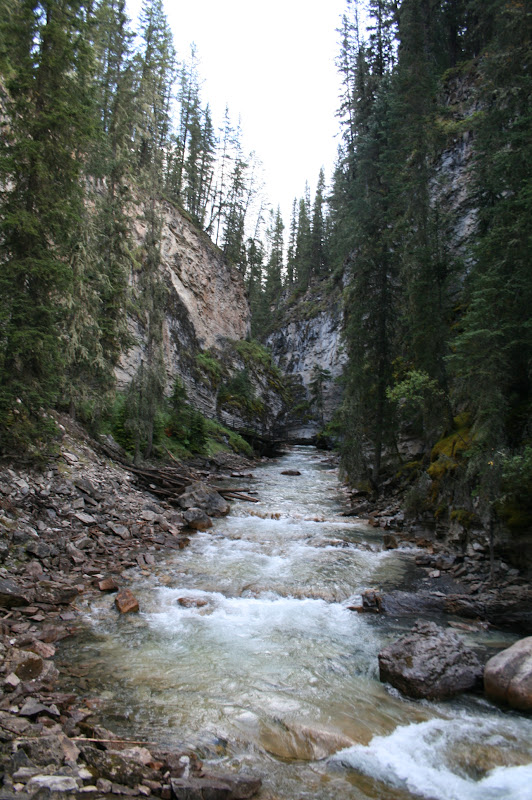 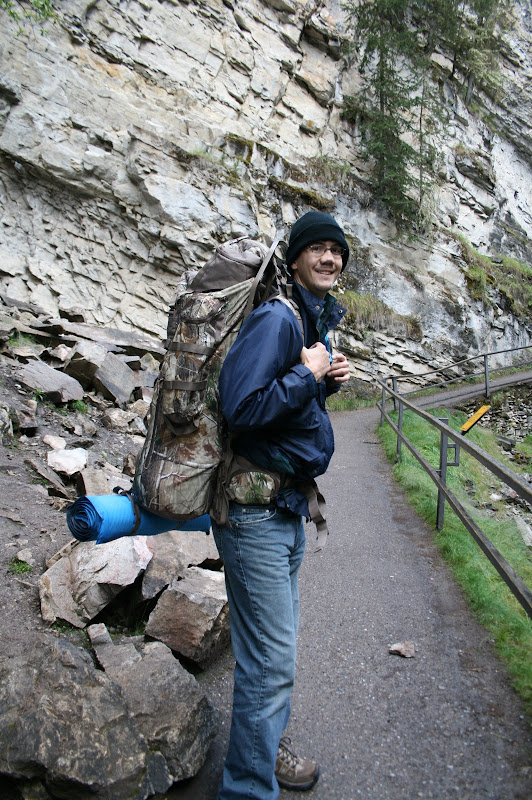 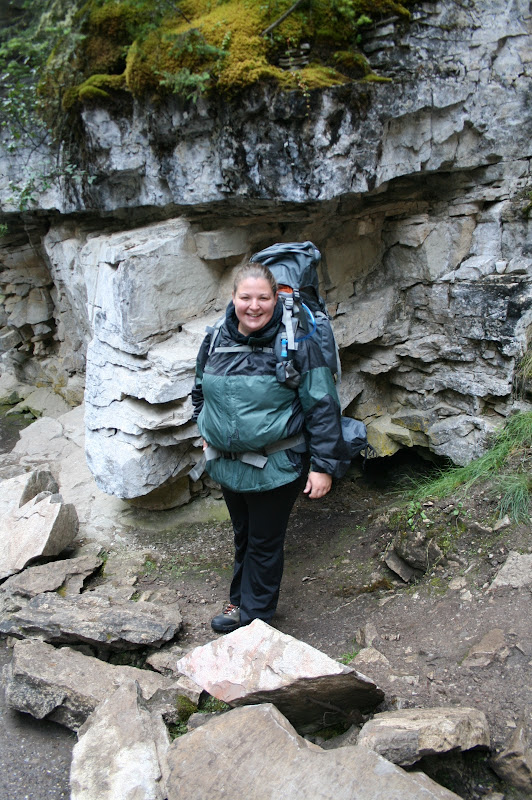 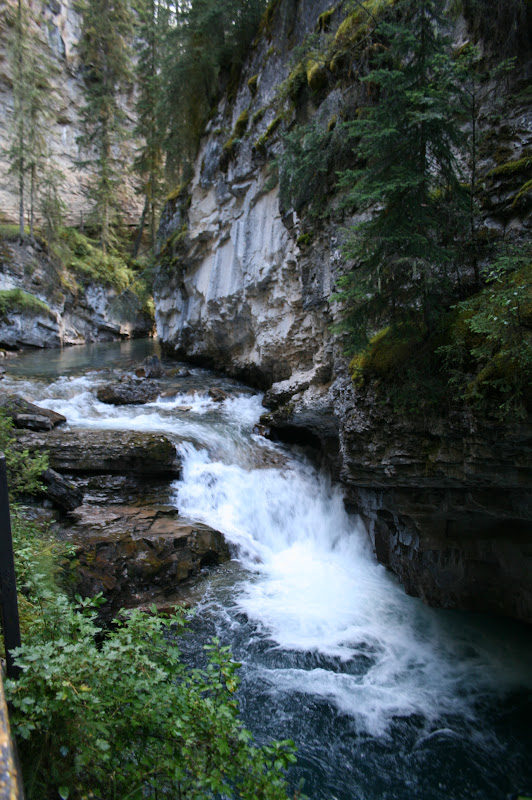 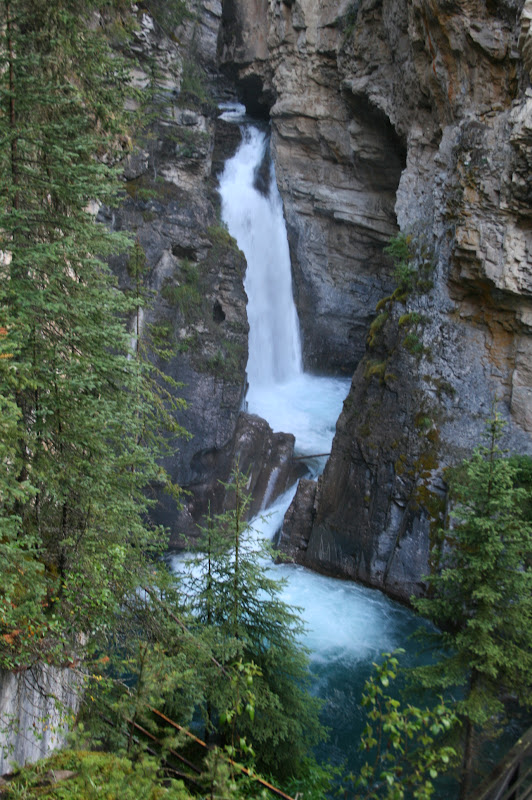 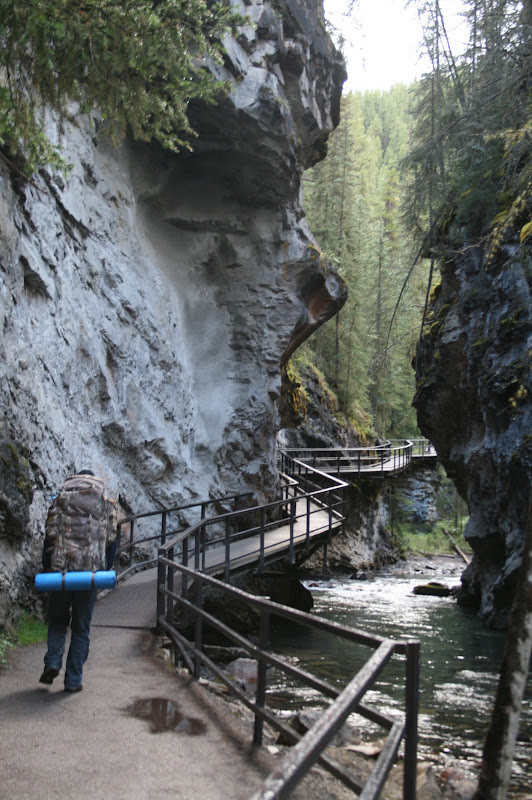 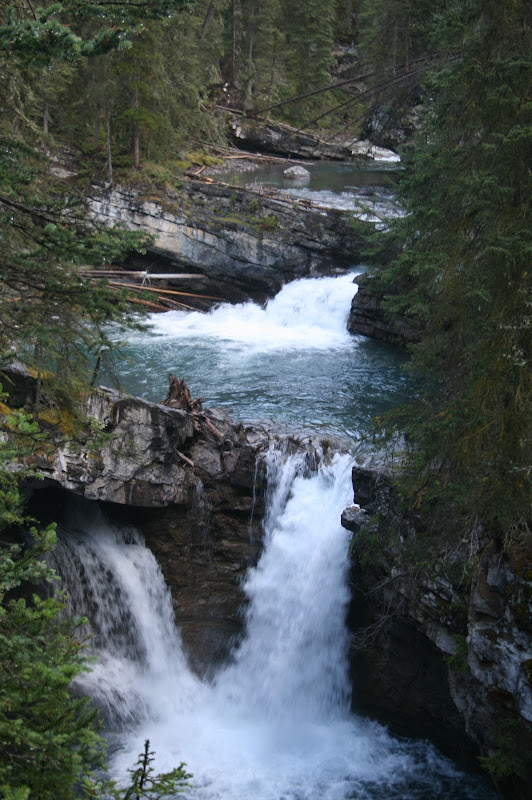 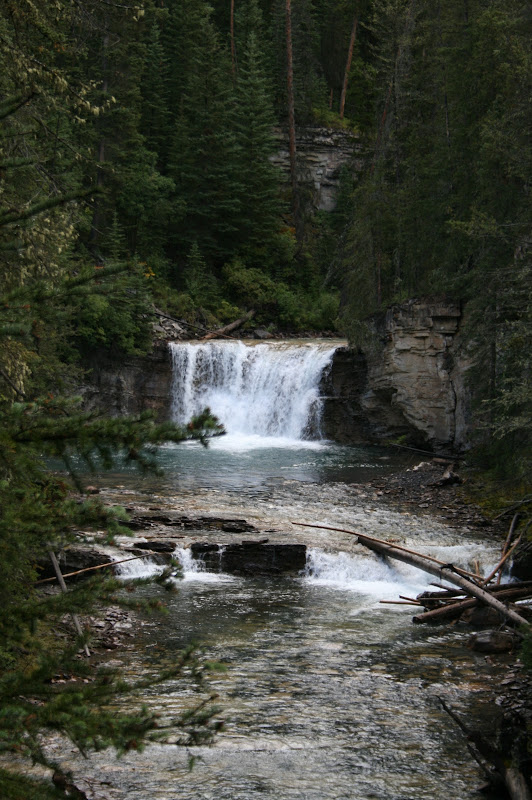 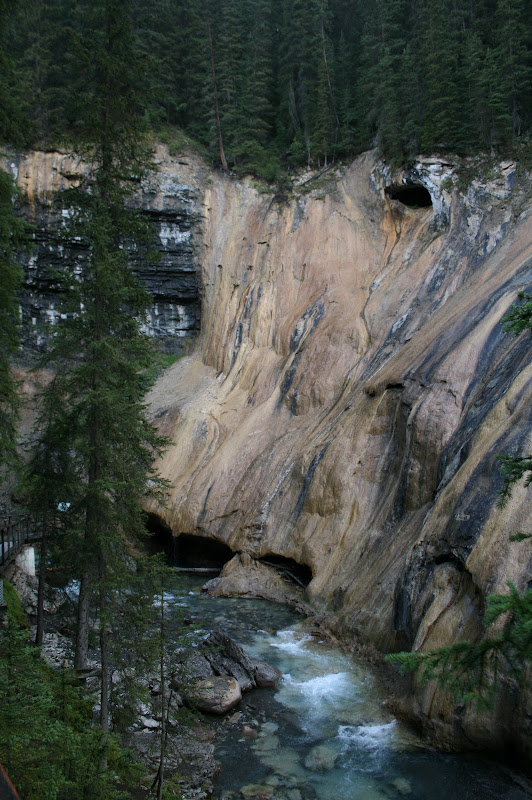 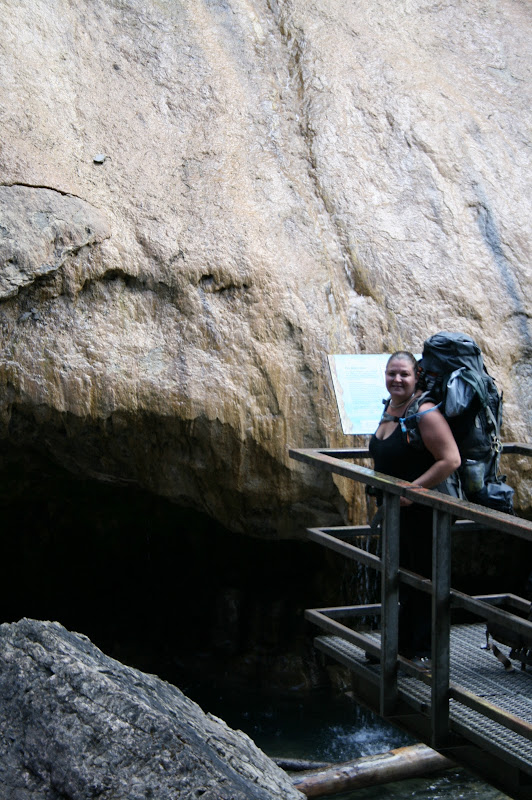 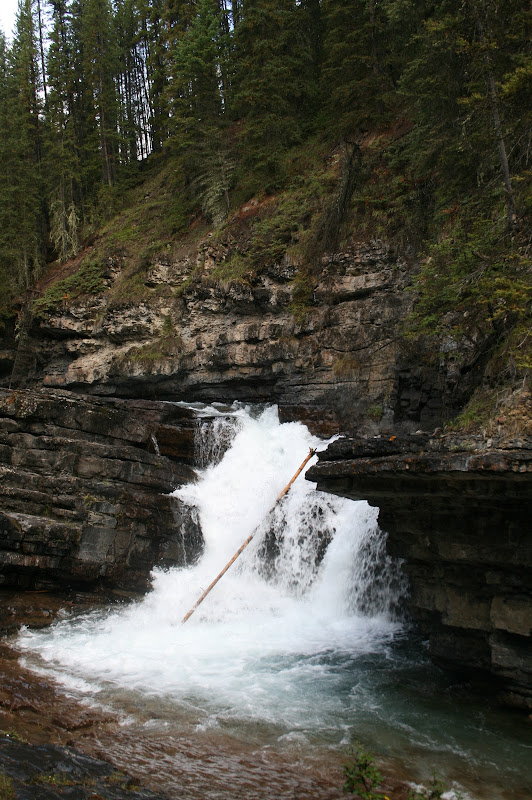 After the paved portion of the trail came to an end, the uphill climbing became considerable. The next goal was the ink pots, which were another 3.2 km in, and during most of that distance we were gaining elevation. It was somewhere around 10:30 am when we arrived at the ink pots, and we were making good time (around 6 km in two hours). Unfortunately it began raining quite hard, and we had to pause at the far end of the meadow to put on our rain gear. 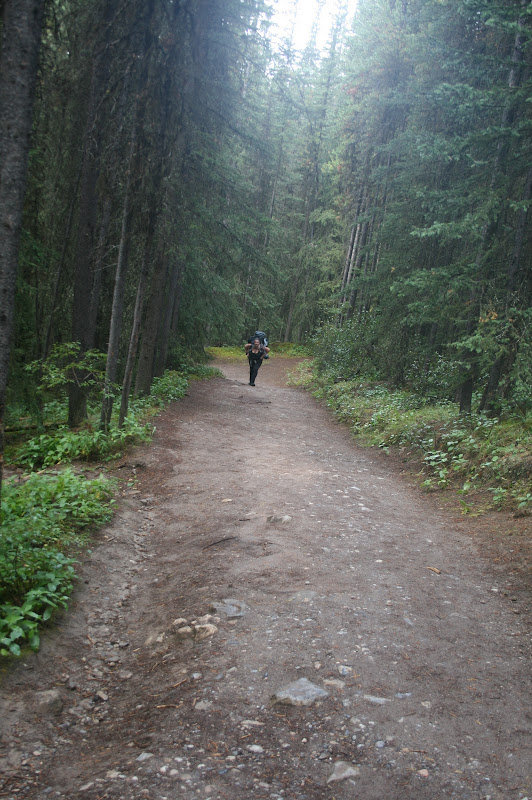 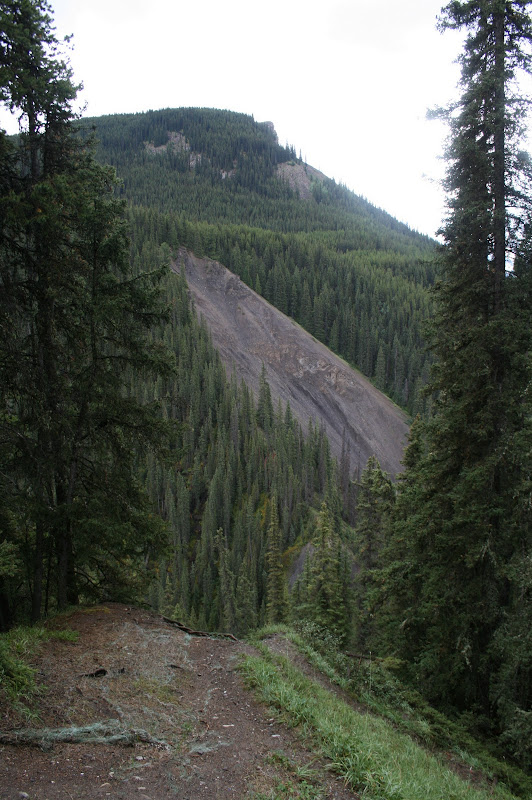 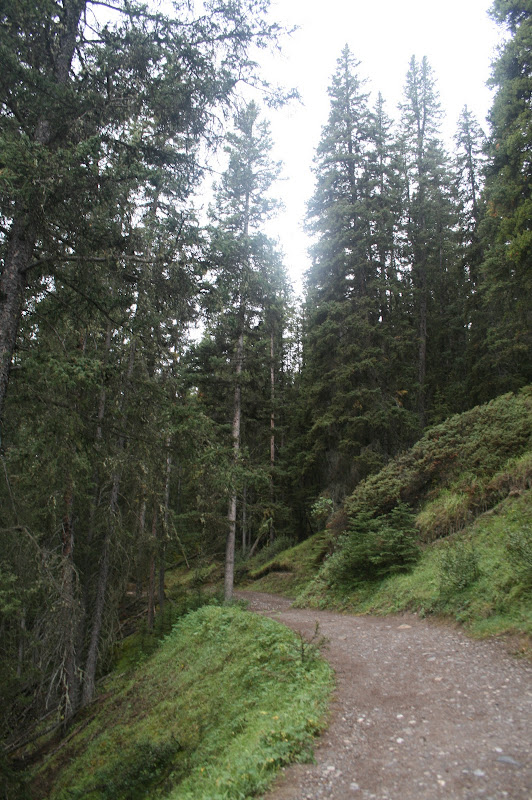 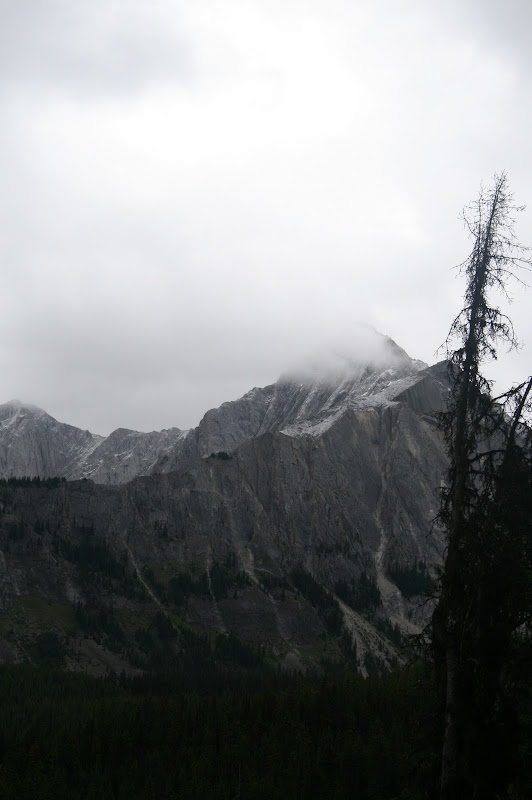 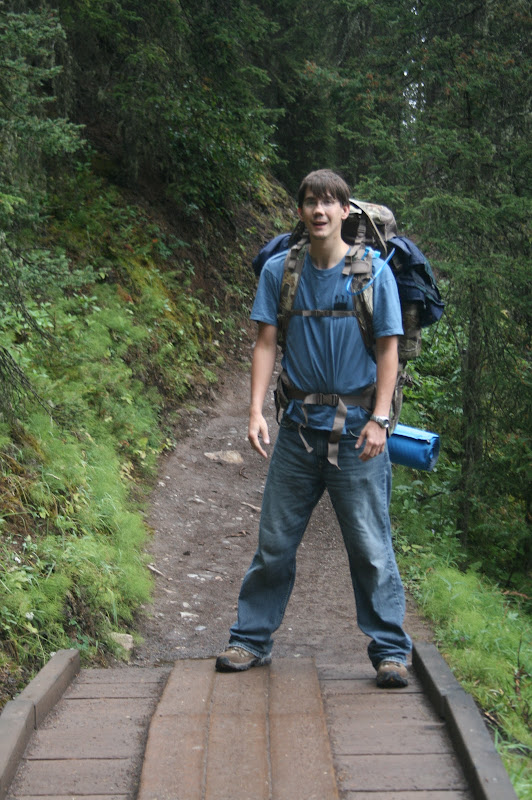 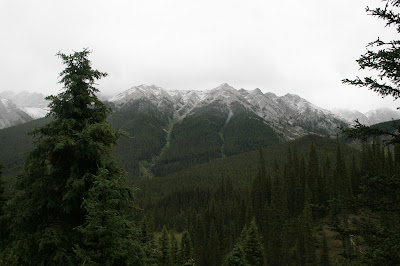 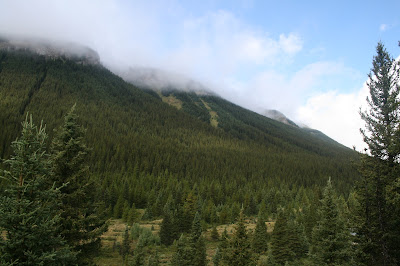 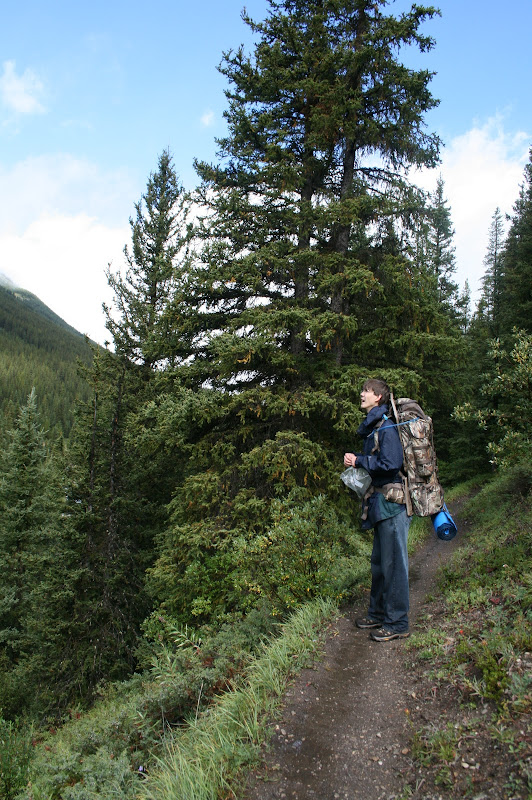 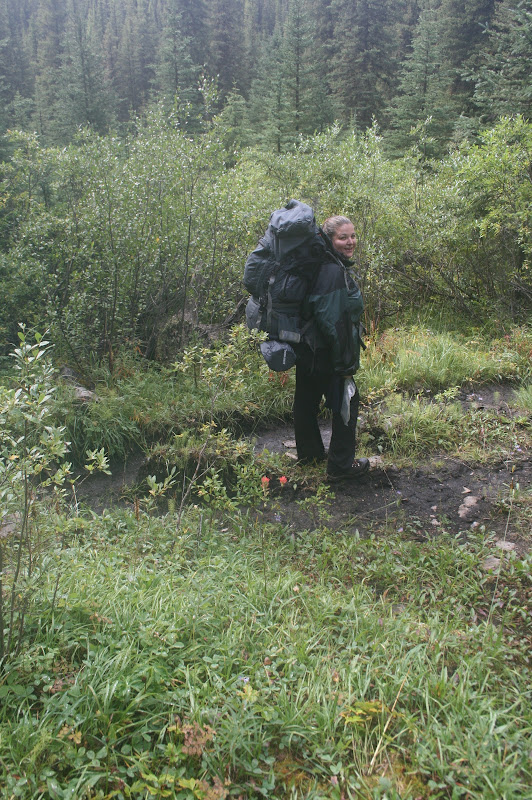 As you can see, the clouds were pretty low, and we were getting progressively closer to the snow line. At that point we were at 1645 m of elevation (or 5,397 feet) which means that we had gained around 700 ft of elevation. For every 1000 ft of elevation gained, the air temperature drops approximately 6.5°C and it certainly felt like it.

After making our way through the valley, we continued upwards, although it wasn’t as steep. We planned to break for lunch at the first set of backcountry camping spots, commonly known as “Larry’s Camp” which was roughly the half-way point of the hike (around 8.5 km in from the trailhead). We made it there around 11:30 am, which was right on schedule.

We selected a spot and settled in for a rather chilly lunch. We boiled water and ate freeze-dried hiking rations, followed by hot chocolate and changing our socks, which had been soaked through for some time. It was cold and we were both tired and damp, but Mike was determined to make it to Lake Luellen and who was I to argue? We broke camp around 1 pm and hit the trail.

The next 4 km were relatively easy to navigate, and only took us an hour and a half to complete. The climbing was gradual, and we were in better spirits, having warmed up due to moving around again. A warden’s cabin indicated that we were just about 3/4 of the way through our journey, and we stopped for a bathroom break and to soak up a bit of the sun, which was shining intermittently. The scenery we encountered was breathtaking. Photos really do not do it justice.

Shortly after we left the warden’s cabin, somewhere around 2:45 pm, Mike shouted from in front of me “What the hell is that?!?! I almost stepped on it!!!” and when I peeked around his gigantic backpack, on the trail in front of us was a mother grouse with several chicks. Apparently he’d nearly squashed the poor thing while she had been foraging on the trail, because they didn’t seem the least bit bothered by our presence, nor in any particular hurry to get out of the way. 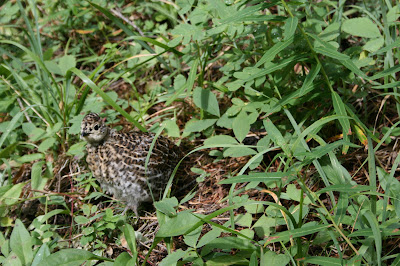 Grouse are delicious, by the way, but these ones were safe, as hunting is not permitted in the park.

Not long after we passed the grouse, I heard something to the left of the trail, making quite the racket. After a moment of searching the forest, which was not particularly dense, I spotted something climbing a tree. Initially I thought it might be a porcupine, but it was rather large. A longer look resulted in the discovery that it was, in fact, a grizzly bear. We must have startled it, because it shimmied up the tree, decided that it still didn’t feel particularly safe, scooted down the tree, and ran for it’s life. It was still a cub, likely born sometime in March, and still under the care of it’s mother, so we didn’t bother to linger very long. Neither of has opted to carry bear spray, and I didn’t fancy having an encounter with his parental unit.

The trail began to climb more steeply, and the hail began to fall on the already-muddy maze of rocks and tree roots we were navigating. The next 2.5 hours were some of the longest of my life. We pushed on, at times I was certain I couldn’t move another step, but Mike encouraged me, and we took quite a few breaks along the way. It was incredibly challenging, and there were moments when I wanted to just lay down and die, but we eventually made it to the junction where the trail breaks off to the lake, or continues on to Badger Pass and then some.

There was only 1 km left to go, but it turned out to be almost completely uphill, and very, very steep. Mike and I looked at each other and sighed. We were both exhausted, but we dug deep and trudged up the trail, slowly, but steadily. I can’t begin to describe to you how difficult and discouraging it all was. We were both ready to cry when finally the trail turned a bend, and over the crest of the hill, we saw the blue-green depths of Lake Luellen. That last km took us 45 minutes. From beginning to end we’d gained a total of 2,200 ft of elevation. The air was thinner, and the temperature was significantly lower, but we were happy to be there none the less.

The hike in took us 9.5 hours in all, which includes the 2.5 hours worth of breaks we took, so 7 hours of actual hiking.

We were soaked and cold and more exhausted than we’d ever been before in our lives, but we pitched our tent, and got a rather small fire going. The lake was a smooth as glass, save for a pair of loons, which were gliding over the surface. They came close to the shore to check us out, before resuming their business of diving for food.

I cooked poached eggs for supper, which we ate with logan bread by the fire. The lake is not very far below the snow line, which means it gets bloody cold in the evening. We didn’t linger long outdoors when it began to get dark, especially when dry clothes and our sleeping bags were waiting.