On Saturday morning around 6 am I reluctantly extracted myself from the warm cocoon of my mummy sleeping bag, in order to, um, answer the call of nature as it were.  The first indication that it was going to be a rough start to our second day was the fact that the ground was covered in half an inch of frost, and ice crystals (the result of frozen condensation) fell on my head as I unzipped the fly of our tent.

As our boots (and really most of the clothing we’d worn the day before) had been soaked, we had left them outside of the tent.  That was something of an unfortunate mistake, as the temperature had dipped to around -8°C overnight and my boots were now frozen solid.  Literally.  I couldn’t have gotten my feet into them if I’d wanted to (which I didn’t really want to, seeing as they had become blocks of ice).

So, that meant sprinting bare-foot for about 50 feet (mostly uphill) on the frosty ground in order to use the privy.  At least the view from the toilet was excellent: 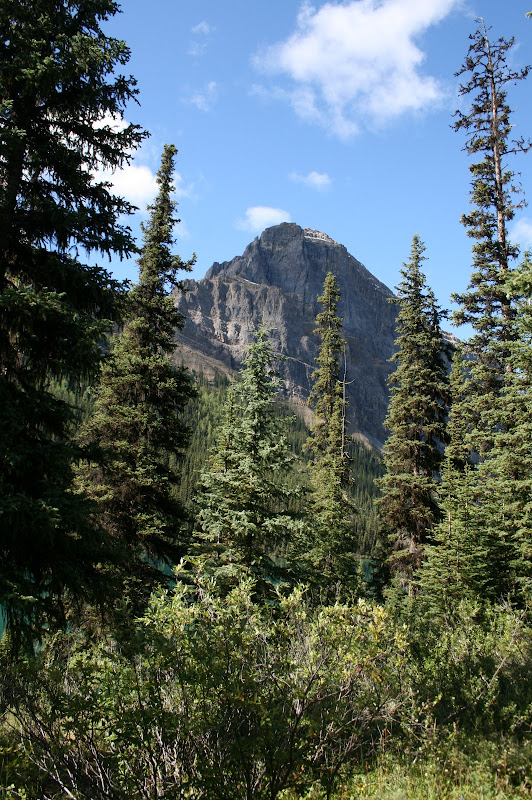 By the time I dove back into the tent, I could no longer feel my toes.

“Maybe I’ll wait a bit longer to get up” Mike remarked, while he watched me scramble to get socks on and wriggle back into my sleeping bag.

“You know who comes up to the mountains this late in the season Micheal?” I said, rubbing my feet in an effort to jump-start the circulation again “CRAZY PEOPLE!  That’s who.”

The view from our tent somehow justified all of the cold and craziness: 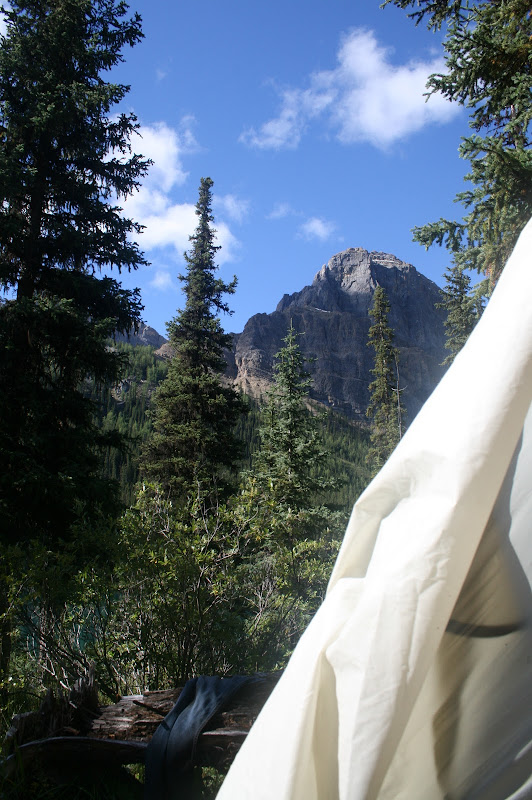 We fell back asleep until somewhere around 9 am, when Michael could hold it no longer and had to go outside.

“GAH! The ground is still frozen!”

Indeed. Apparently I had failed to mention that it doesn’t really get decently warm up there until nearly noon. Meaning it would be a while longer before the ground or our boots were bearable.

We didn’t leave the tent again until around 11 am or so. By that time the sun had managed to rise over the eastern side of the ridge and melt the ice from our tent, and from the ground and foliage that it touched. We elected to stay in our pajamas, since they were as warm as anything else we had, and changing out of them meant exposing our skin to the chilly air, which was not the most appealing prospect. 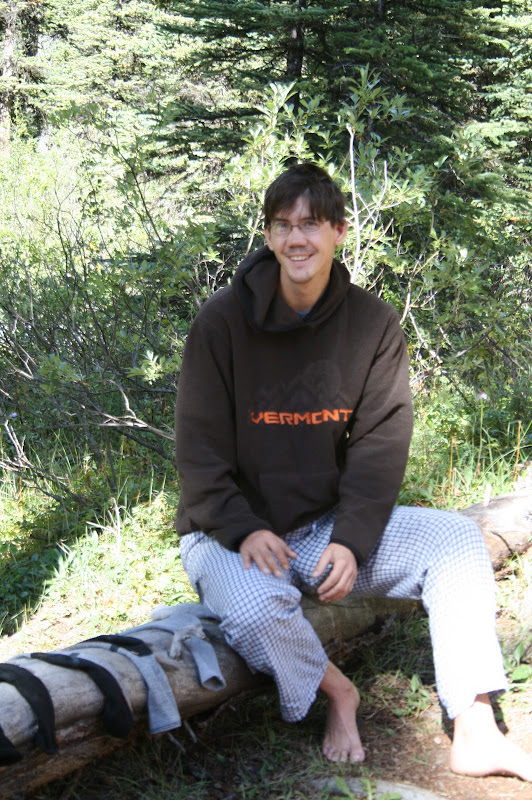 Fortunately we were in good humor, and the day looked to be mostly sunny. Michael packed our boots off and put them in a sunny spot, and we draped everything else in the most well-lit areas we could find and hoped that things would dry before the weather changed.

The lake was even more magnificent in the sunshine than it had been the night before. 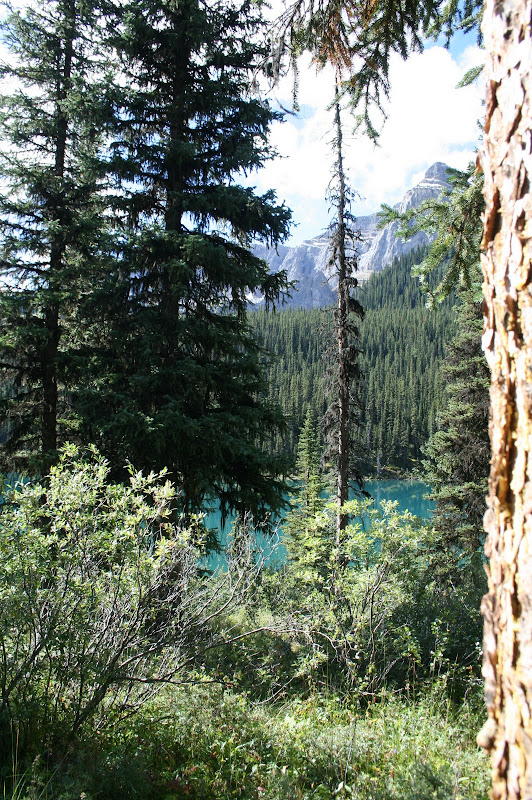 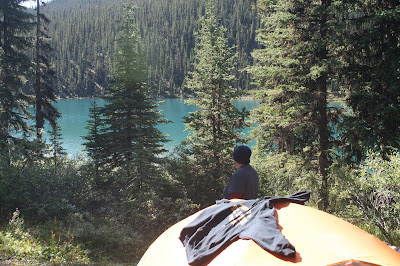 The first order of business was coffee, and then a breakfast of logan bread and jam. The cooking area and fire pit are located a good distance from the tenting sites, in order to (hopefully) prevent bears from eating campers while they sleep, heh.

It was kind of wonderful and strange being the only two people out there, and knowing that civilization was so far away. I didn’t have cell phone service (although my phone does allow for emergency calls out there) and there were no other campers for at least 9 km in any direction. It was totally and completely peaceful. 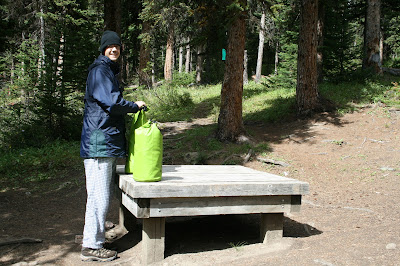 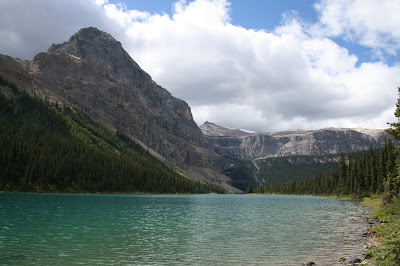 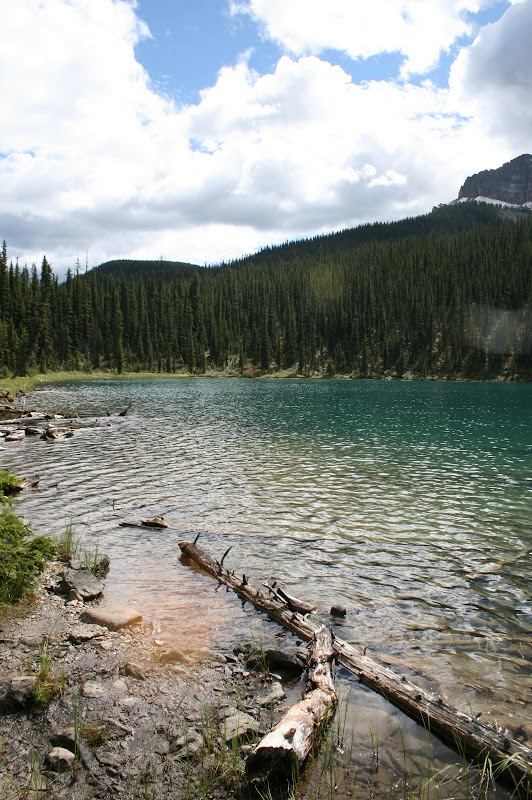 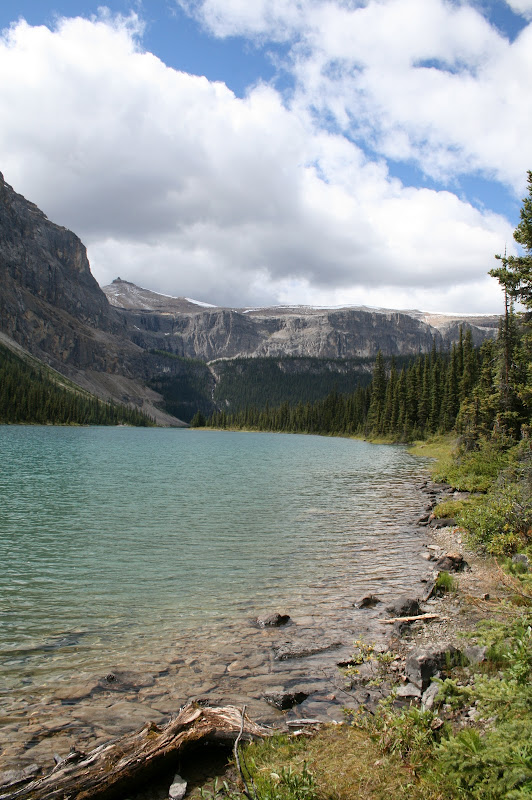 Many backcountry camping spots in the Banff area are equipped with bear cables, from which you hang your food and cooking supplies. It’s much easier to have them provided for you than to try to set the things up yourself, so we happily took advantage of them and hung our water-proof and air-tight food sacks anytime we weren’t using them. 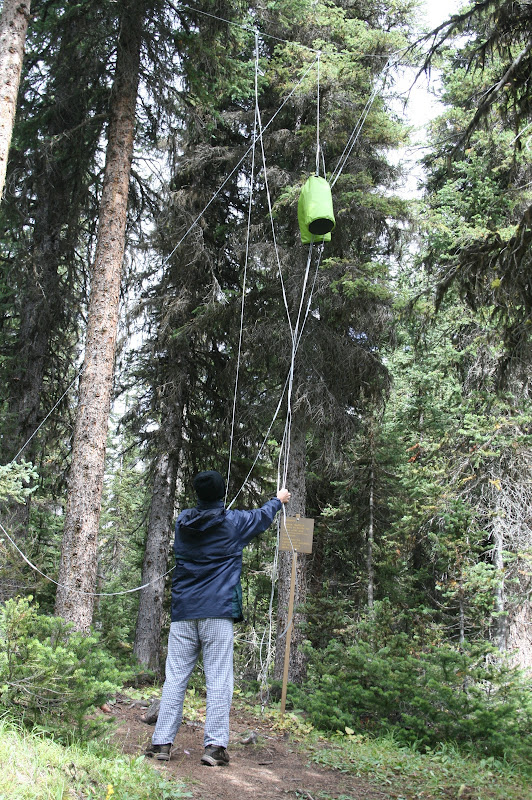 After breakfast we spent the rest of the morning and early afternoon basking in the sunshine and wandering across the logs in the lake. We even saw a couple of fish swimming along slowly in the shallows. That was really amazing (unfortunately no photos). 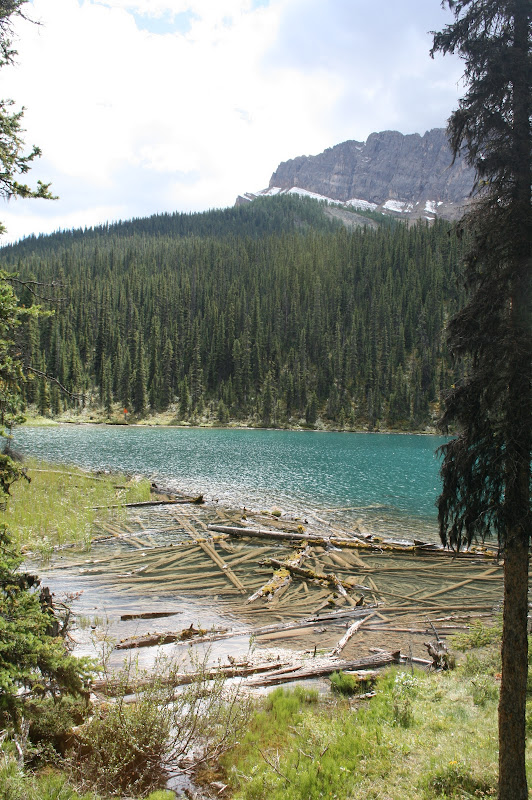 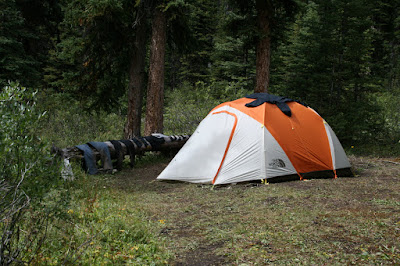 Below you can see the top of our tent (affectionately known as “The Toad”) in relation to the lake and the mountains. 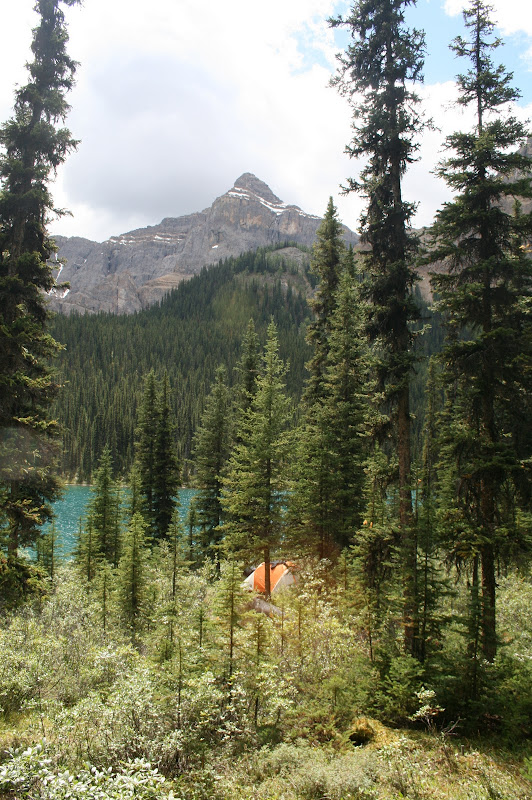 Having dealt with wet wood the night before while trying to start a fire, Michael thought it would be a good idea to collect now-dry deadfall for burning that evening. The clouds overhead warned that there might be more precipitation, so while we still had sunshine, we trekked off along the lakeshore to forage. 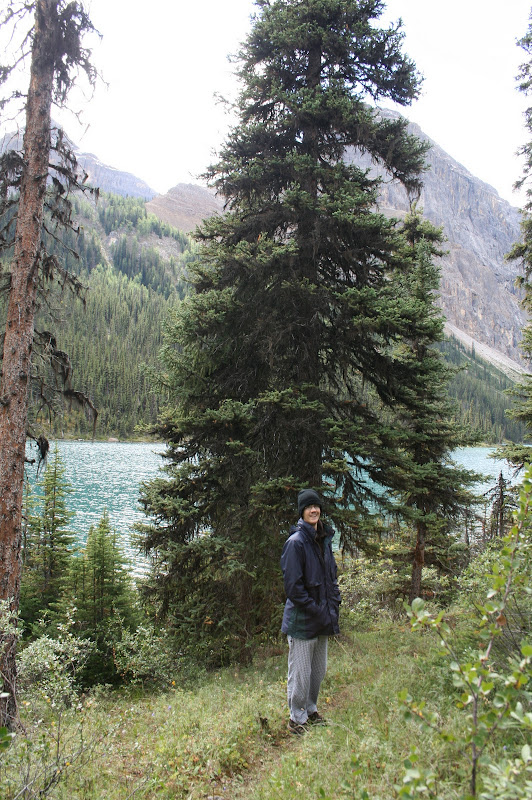 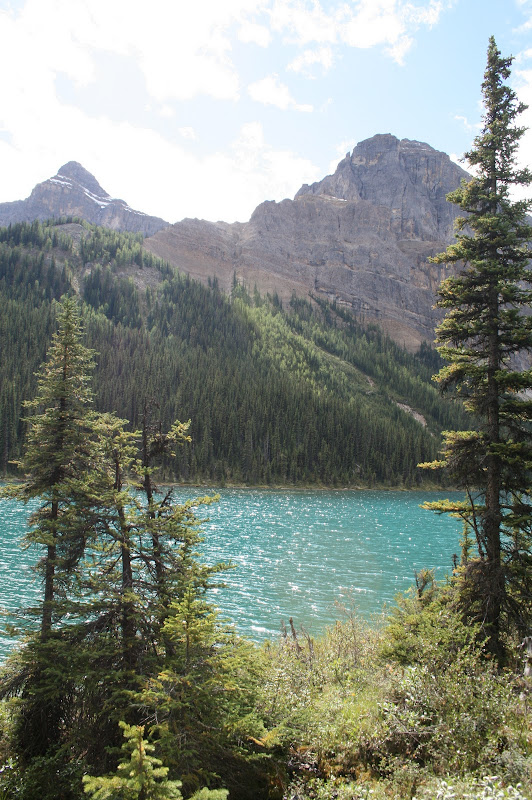 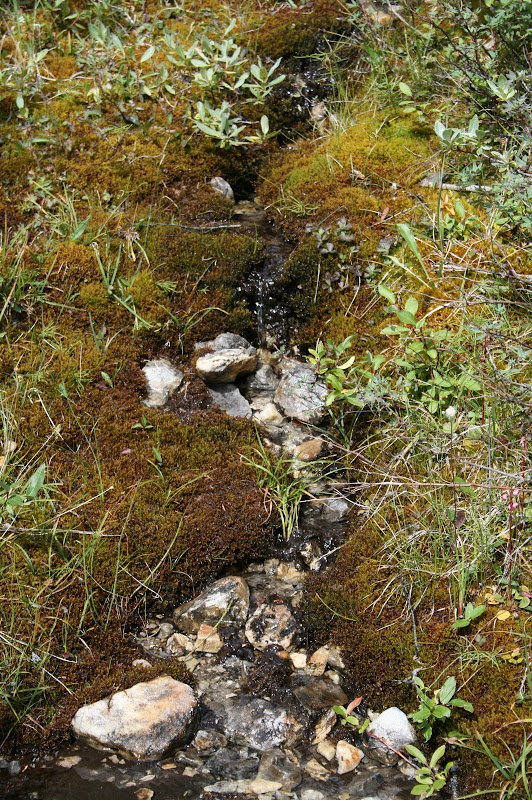 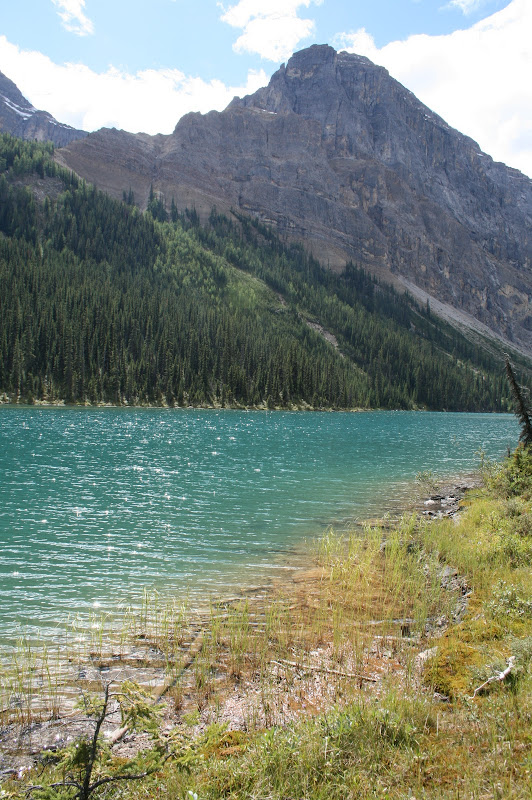 We came across a spruce-bough hut that someone had constructed at some point during the summer. Structures of this type, and building in general is not allowed in the parks or the backcountry, so I hope that it was something of dire situation and not just some a@#hole. I suspect it was the latter as we found several well-rusted food cans on the ground around the makeshift fire pit. 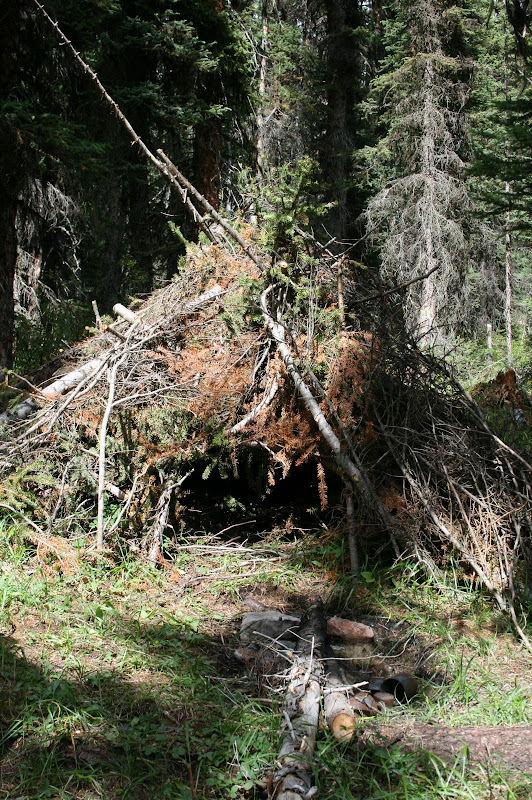 Fortunately for us the hut was compiled of a lot of lovely and very dry branches. We gathered as many as we could carry and very gingerly made our way back to our camp. We stacked the wood in the driest spot we could find and then gathered a little more until we were satisfied that we had enough for that night (and a little extra, because Michael thought it would be polite to leave some for the next people who came).

Then we re-filled our Platypus bags and walked along the waters edge for a while, just when it began to hail. We ducked under some trees to watch for a while. It’s difficult to really capture it in photos, but the apparent “haze” in the following pictures is actually hail. 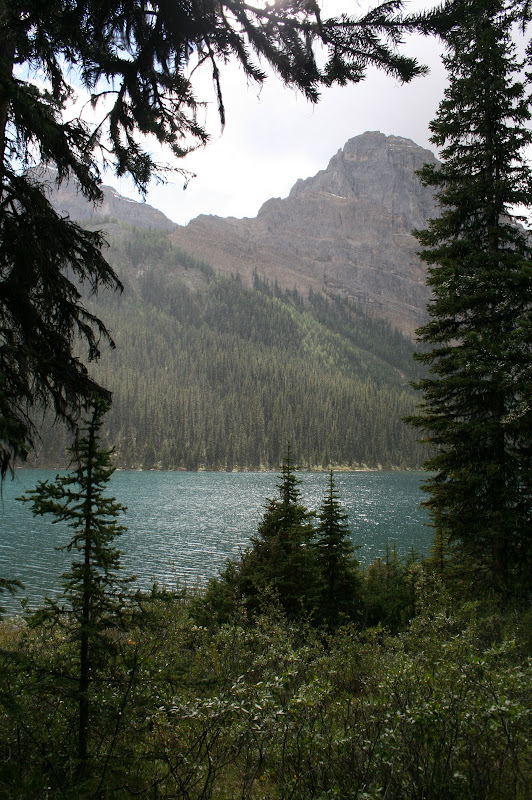 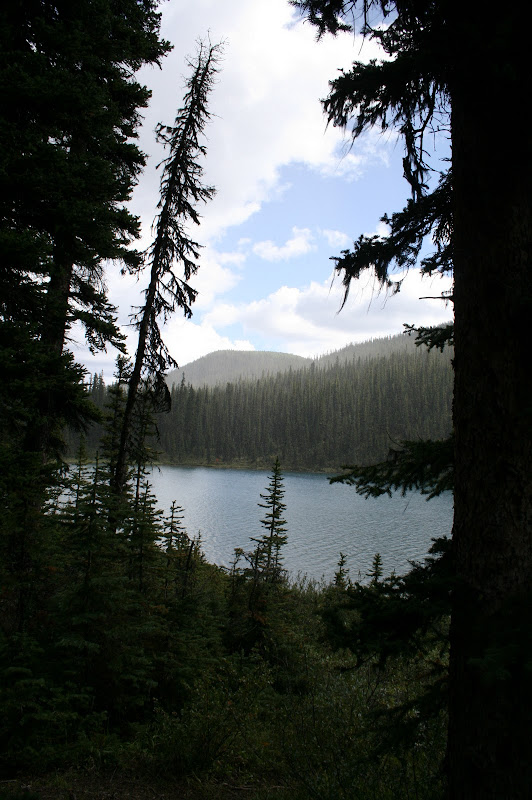 Fortunately it didn’t last long, and shortly after it quit, I heard someone shout in the distance.

The woman who had issued us our wilderness passes on Thursday had mentioned that another party was booked to arrive at our site that day, and sure enough, it was them. Two older men, an older woman, and a boy who was around 20. The men and then woman were all siblings and the boy was the son of one of the men. They were a jovial group, and had come up to the lake to do a little fishing.

Shortly after they arrived and began to set up camp, it started to rain, and so Michael and I retreated to our tent and snacked on chocolate-covered coffee beans, beef jerky, and trail mix while we waited for the clouds to blow over.

When the sky cleared up a little the men went off to fish, just as Mike and I were crawling out of our tent. We chatted to them briefly (turns out some of their extended family grew up in the same town as I did) and told them to let us know if they caught any fish that they didn’t want. I was wishing that I’d brought tinfoil or some other means of cooking said fish because they caught three of them that evening, but I couldn’t be bothered to muck around with cleaning and somehow cooking the damned things, so they went back into the lake.

We all ate dinner, and sat around the fire talking and laughing. They were thrilled that we had gone to the trouble of collecting firewood, and it was rather nice to be warm and dry before bed for a change. It was a great time. They are all avid hikers and regaled us with stories of The West Coast Trail and visiting Lake Luellen in their youth. We learned a lot of useful things by listening to them (they dehydrate all their own trail food, and they had these fantastic homemade fire-starter things) and they learned a thing or two from us as well. Namely “Leave your campsite better than you found it” which has become a new rule amongst them (thanks to Mike, and by extension, his mother).

Somewhere around 10 pm we reluctantly headed to bed, as we wanted to get an early start in the morning. We had 18 km to hike out the next day and although it was going to be mostly downhill, we wanted to allow ourselves plenty of time to make it out.